Pastor Matthew Rickett came to Antioch in August 2018. He grew up going to a Baptist church in Hendersonville TN and was saved when he was 13. He married his wife, Allison, in 2004 and has served in the ministry since that time. He and Allison moved to the west coast in 2006 to serve as the Pastor of a small church plant in Oregon. In 2009, he accepted the pastorate of Faith Baptist Church in Detroit MI. While there, he was able to attend Detroit Baptist Theological Seminary. In 2013 he and Allison moved back to the middle TN area. Since that time, they have been focusing on loving, shepherding, and raising their three children- Levi (2011), Lily (2014), and Luca (2016). 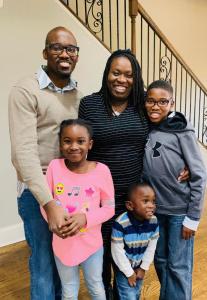 Elder-Candidate Ray Jackson was set aside by Antioch on 1/12/20 for the consideration of pastoral leadership. Ray and his wife Hartrice have 3 children, Kamari, Harley, and Caleb. They are joyously expecting a baby boy to make his arrival this year! Ray has been serving Antioch church since September 2018 by leading us in worship. Antioch is thankful and blessed to have him and his family and we look forward to his leadership.